Major Taiwanese textile suppliers that have long been part of the supply chain of FIFA World Cups are using their advanced technologies to transform recycled plastic waste into soccer jerseys and accessories, tapping into tremendous business opportunities.

Far Eastern New Century Corp is one of them. The textile brand has closely worked with Adidas and environmental organization Parley for the Ocean to make jerseys from marine plastic waste.

In this year’s tournament, which kicks off tonight, seven teams — Germany, Japan, Spain, Argentina, Mexico, Belgium and Wales — use Far Eastern-made jerseys, while an additional two teams wore them in their unsuccessful qualification bids.

Mexico have even been selected by several international news media as the “best dressed” team.

“Mexico have never been short on strong designs, but even by their lofty standards, their 2022 kits are impressive,” ESPN said. “The detailed pattern emanating from the collar and stretching all down the front of the shirt — a nod to Quetzalcoatl, an Aztec god whose name translates to ‘feathered serpent’ — grabs your attention and refuses to let go.”

The World Cup, running through Dec. 18 in Qatar, is expected to attract a record 5 billion viewers across the world, creating hundreds of billions of US dollars in business opportunities for suppliers of merchandise, soccer’s world governing body FIFA estimated.

Huang Chuan-yi (黃全億), a manager in Far Eastern’s long fiber division, said that his company has spent about seven years to develop products from marine plastic waste, and this year is the first time it can demonstrate its prowess at a big international event. 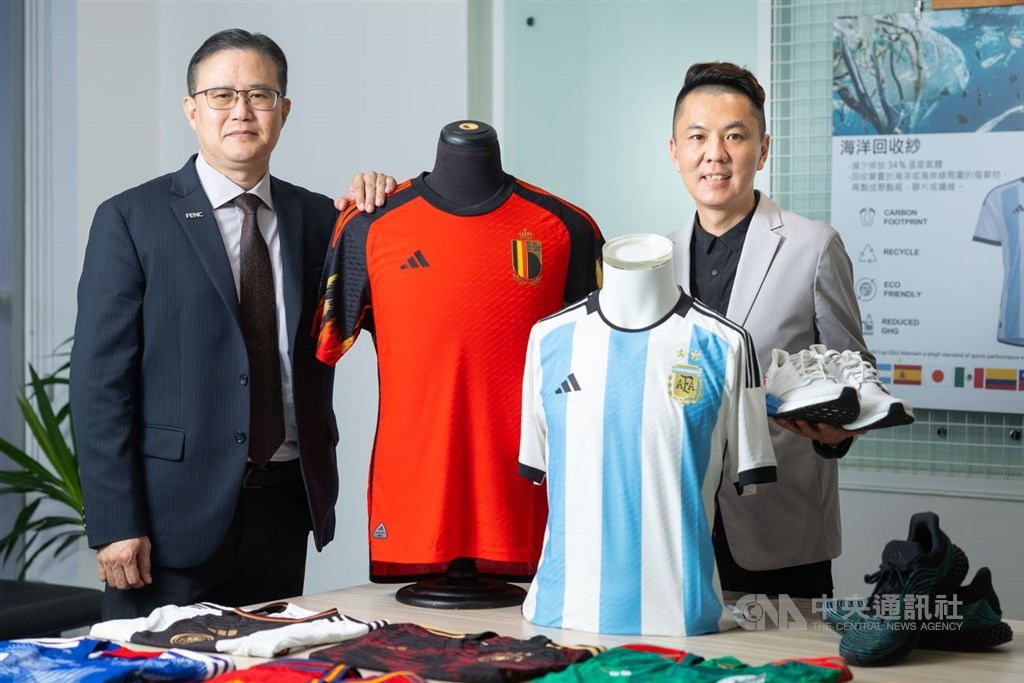 Huang said Far Eastern has been part of supply chains for World Cups for more than 10 years.

Shinkong Synthetic Fibers Corp has also been a major player in the World Cup supply chain for more than a decade, said Lo Shih-chuan (羅時銓), deputy head of the 55-year-old firm’s decisionmaking committee.

Lo said his company has been developing yarn based on recycled PET bottles for many years and has built a solid customer base with high loyalty.

The recycling rate of PET bottles in Taiwan is 95 percent, the highest in the world, helping the company source its base material, Lo said.

Shinkong has secured patents for its Shin Sigma 3.0 technologies, which help its products draw moisture away from the body, Lo said, calling it a key property for sports clothes.

Shinkong’s products are light-weight and opaque, Lo said, adding that the company uses low carbon emissions technology to produce them.

Its products are successful in the global market, he said, citing FIFA World Cup 2018 in Russia, where Taiwanese textile firms accounted for more than 80 percent of the supply chain.